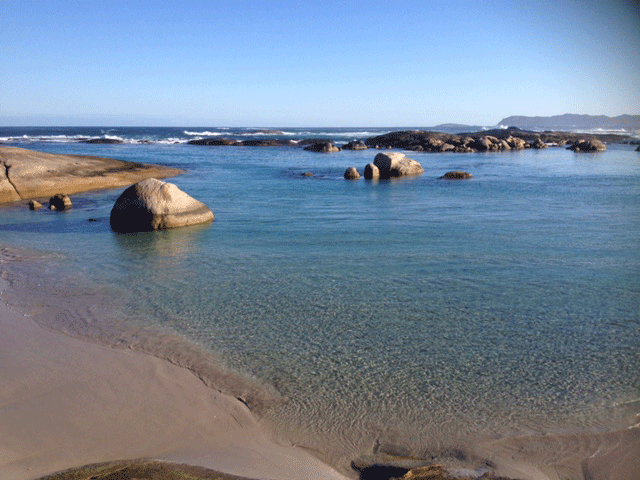 There is alchemy in the business of writing. Authors are often asked where their ideas come from. Divine inspiration, shells on a beach, talk-back radio … Sometimes I can pinpoint a moment, more often a story grows from linked moments of wonder or interest.  As ideas come together and bubble, a manuscript grows, and sometimes, with luck, this mash turns into a book. Some moments that sparked The Shark Caller involved diving on reefs in PNG’s New Britain area as well as snorkeling in Marovo Lagoon (Solomon Islands) and WA’s Greens Pool.

Greens Pool was especially significant as it became (in my mind) the fictitious ‘Abalone Cove’.

In the opening scene of The Shark Caller a teenage boy dies in mysterious circumstances at Abalone Cove. A blue-ringed octopus is involved. I once saw a blue-ring in Greens Pool; just a surprised flash before it turned sandy brown and crept away. Greens Pool is a magical place to swim. When I lived in Denmark my regular loop involved a long lap, from a rock that sometimes hid a wobbegong to the far end where a Gloomy Octopus lived under a large rock. Her garden of shells gave away the entrance. These shark and octopus encounters swirled around in my imagination, along with the evocative rocks that guard Greens Pool. I added PNG diving experiences,  environmental worries and my own sense of communities being linked by oceans. This all gave me a strong sense of setting to draw on during the long writing process.

If you’d like to read more about The Shark Caller, here is a post from last World Octopus Day.