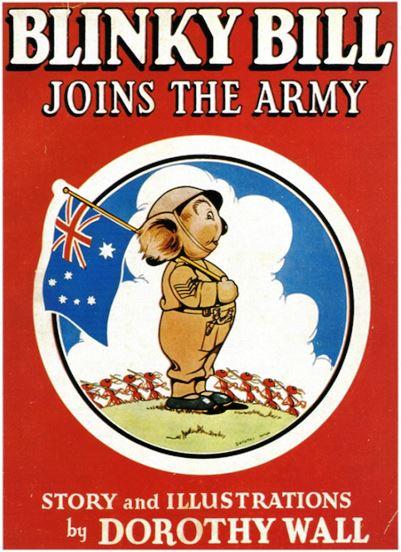 Animals have long been used to help children make sense of challenging times. In 1940 a character well known to Australian children was enlisted to help young readers make sense of a complex and changing world.

War is frightening, a time when animals, like children, are innocents caught up in adult-created horror. This makes animals neutral storytellers well placed to reflect upheavals in society.

In Dorothy Wall’s earlier books, Blinky Bill is portrayed as a cheeky larrikin character with little respect for authority. This changed with the advent of war. By 1940 most Australian children would have seen older men signing up after AIF recruiting drives, men who perhaps should not be volunteering. Blinky, a familiar and beloved character, also steps up to do his bit by training bull-ant soldiers. In doing so he was able to help soften the fears of children.

In another second not a soldier was to be seen. They’d disappeared as suddenly as they had come: all but a poor old fellow who had fallen out of the ranks unseen by Blinky or his comrades. Sheltering behind a pebble he rubbed his legs with his mandibles, trying to stop the aching that his swollen joints produced. Of course he should never have left his home underground; but he was an old soldier and had been a fierce fighter in his youth. It was very hard to sit back now and see the younger fellows go out to fight and not be able to take part in it. So Grandpa Bull-ant had smuggled his way into the company with sad results.

In this current confronting time, perhaps well-chosen books can also comfort our young readers. A Sick Day for Amos McGee comes to mind. Does anyone have other suggestions to share?