Do Animals Make Us Human? 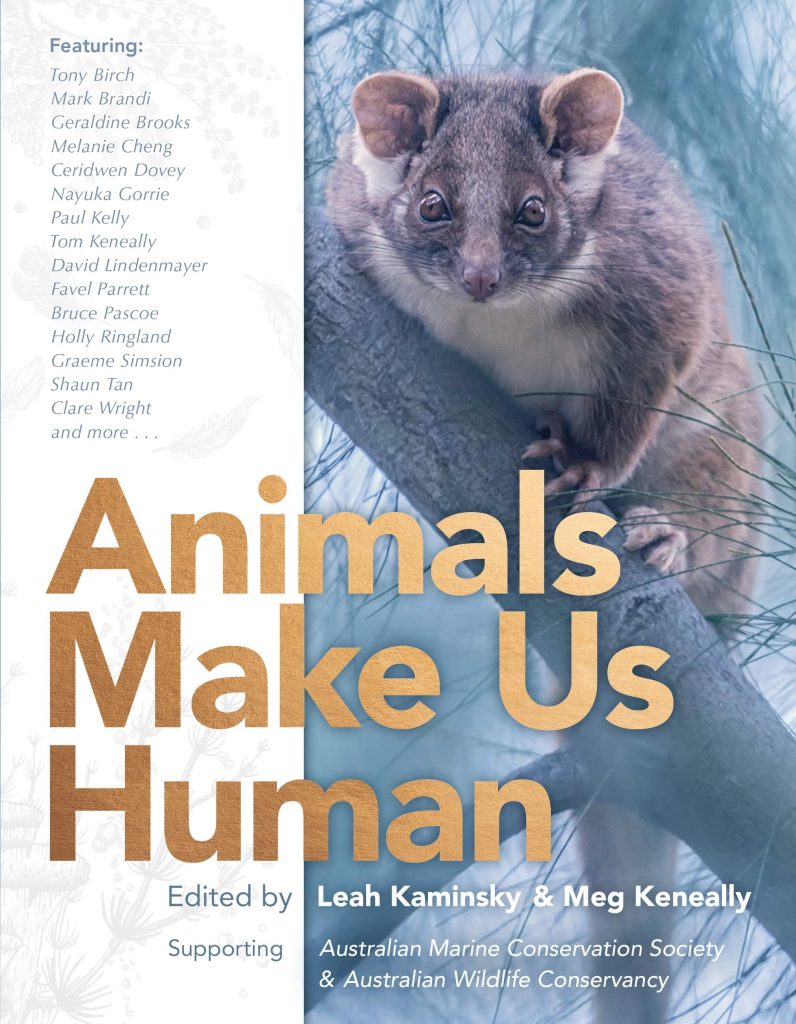 A beautiful new book edited by Leah Kaminsky and Meg Keneally explores this question, and after reading, the answer seems to be a resounding ‘yes’.

Animals Make Us Human is a collection of reflections by Australian authors and researchers. Each writer shares a moment of interaction with an animal, exploring a sense of wildness and otherness, accompanied by beautiful photographs. In the foreword, Bruce Pascoe begins, ‘Sometimes I look at my dogs, their furry, clawy feet, their silly noses, their ridiculous tails, and I think, why?’

Some offerings are deeply personal; Cate Kennedy‘s connection to platypus or Robbie Arnott‘s moment with a shark, ‘We’ve smelt the huff of seal breath; we’ve tasted squid ink sprayed across our faces. But we’ve never seen a shark fly … we can’t articulate what has happened … We can’t explain that we are now, in ways both small and huge, changed. We can’t tell them the sea has torn its face apart to show us the truth of its wildness.’ p. 88. And in Lucy Treloar‘s magical valley of lizards, ‘It was as if the natural world had run at me and screamed in my face, ‘Remember your place. You are nothing here, nothing!’ p. 41.

Other writers like Ceridwen Dovey ponder the words of researchers, exploring the concept of ‘animal epiphany’ moments (Roberto Marchesini) and quote animal historian such as Boria Sax, ‘For a while, the boundary between a person and animal is blurred and almost disappears. This can produce a flurry of intense emotions such as exaltation, confusion, wonder, and melancholy. Through an animal, a person achieves a renewed sense of what he is, yet also what he is not.’ p.10.

Meg Keneally writes, ‘I try not to anthropomorphise the creatures I meet down here – it seems arrogant – but it’s hard with blue gropers … Anyone who thinks fish don’t have personality has never met Achoerodus viridis.‘ p. 91. Meanwhile Sonia Orchard explains about, ‘neurons within the amygdala – the brain’s seat of emotions’ that fire when we see animals. If the animal is not threatening, ‘that intense tickling of the amygdala makes us feel good.’ p.83.

Did you play What’s your Favourite Page? when you were little? My sister and I did, and this book would have kept us busy for hours. The photographs are all stunning and I have so many favourite pages, but I especially loved Patrick Tomkins‘ echidna, Vivien Jones‘ bats, and Angus Emmett‘s dingo.

Animals Make Us Human is a fundraiser for Australian wildlife. It’s easy to dip into and evokes so many responses; Graeme Simsion‘s philosophical tussle with a wombat is funny, Holly Ringland speaks of butterflies as a metaphor for transformation, I was moved by Cate Kennedy‘s poignant connection to platypus and loved Ashley Hay‘s fascination with Goethe and blue sea creatures …

Every offering is thought-provoking. This book would make a wonderful gift for an animal lover. The last word goes to Bruce Pascoe again, ‘I don’t want to demean their behaviour by comparing it to ours, but neither do I want to underrate their intelligence, to separate myself from them. I want to be one of them, just another sentient animal living on the river.’ p. 234.